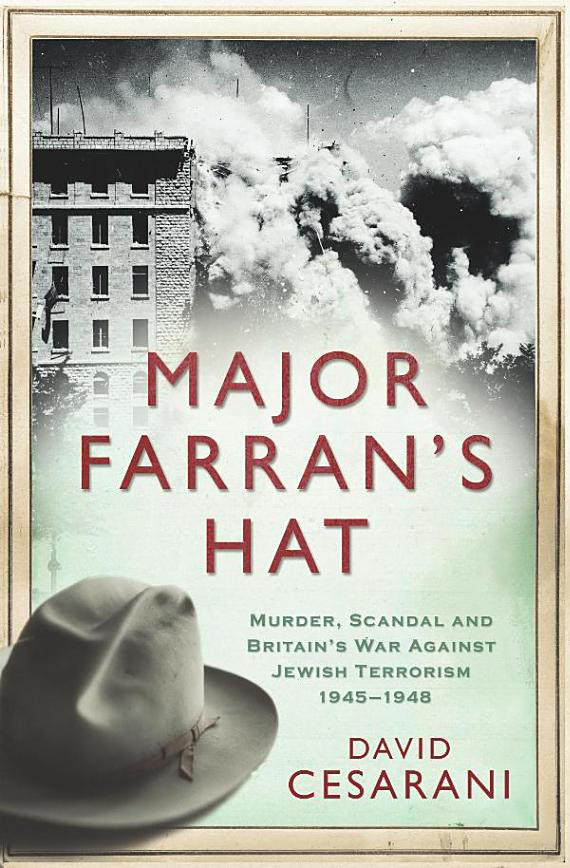 In May 1947 Alexander Rubowitz, a Jewish teenager, was mysteriously abducted in Jerusalem. He was never seen again. Rubowitz was active in a Zionist underground group fighting British rule in Palestine. Witnesses said he was seized by British policemen. A grey felt hat found at the scene was believed to belong to Major Roy Farran, a highly decorated ex-SAS officer leading a covert counter-terrorist squad. As suspicion of foul play circulated Farran fled to Syria. He was persuaded to return and was acquitted after a sensational court martial. He came home to a hero's welcome. But the Zionist underground swore vengeance. It had already penetrated British homeland security and now it sent its top man after Farran.

Major Farran's Hat explores the reasons why Britain lost Palestine – and why its counter-insurgency policy failed. Setting Farran's remarkable story in the context of the first modern campaign of international terrorism, David Cesarani draws on recently declassified files of the Security Services to reveal the full extent and ambition of Jewish terrorist attacks on Britain in the late 1940s. Part Boys' Own adventure, part narrative history, Major Farran's Hat reveals an untold story of the final years of the British empire – with many parallels for the Middle East today.

Major Farran’s hat has now been made into a documentary feature film called Mandate for Murder and is currently in the process of being sold to a number of broadcasters worldwide.

David Cesarani was born in London, England on November 13, 1956. He received a bachelor's degree in history from Cambridge University, a master's degree in Jewish history from Columbia University, and a doctorate in history from Oxford University. He wrote several books including The Jewish Chronicle and Anglo-Jewry, 1841-1991; The Holocaust; Justice Delayed: How Britain Became a Refuge for Nazi War Criminals; Arthur Koestler: The Homeless Mind. David sadly passed away in October 2015.